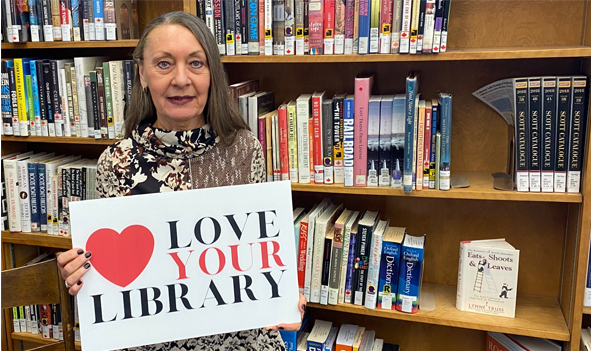 Picton Rotarians have added another chapter to the story of their support for the Love Your Library Campaign.

Members presented a second $5,000 donation, bringing the campaign to improve and expand the 110-year-old Carnegie building to just below $2 million of its $2.8 million goal.

“The donation was a big step up on the ladder for us,” said Barbara Sweet, Prince Edward Counties Library CEO, noting all service clubs in the area have contributed to the campaign, but Rotary has given the most support.

Former president of Picton Rotary Rob Leek says the club’s donations are a result of the emphasis the Rotary club puts on literacy.

“Literacy is one of the keys to fulfilling one’s life goals,” he said. “The library is something that we are happy to support,”

Leek says that an expanded library would create more space for people in the community to come together and is aligned with Rotary values.

The seeds for the donations were planted nearly two years ago when Sweet and campaign chair Alexandra Bake made a presentation to the club members. Shortly after the presentation Rotary donated $5,000 and presented a second $5,000 last week.

Sweet says that donations like Rotary’s are important because the majority of the fundraising will come from private donations. The library is receiving $320,000 from the municipality which makes up just over 11 percent of the overall goal.

A modern extension will double the size of Picton Library and maintain its heritage character. Plans include an expanded collection, performance arts space with non-profit rental options, a new lecture theatre with assistive technologies, an enlarged children’s area and a dedicated Makerspace Room for STEM learning and lifelong enrichment.

According to Sweet this expansion has been many years overdue. “For years we have been grappling with a shortage of space,” she said.

With a little over $800,000 left to fundraise, Sweet says she hopes to have construction start later this year.

She praises Bake’s work as instrumental in getting the fundraiser to where it is today.

“She lives and breathes it,” Sweet said.

Bequests, donations, efforts of the Friends of Picton Library, a John M. and Bernice Parrott Foundation grant and a PEC Council investment contributing to the funding.

Love Your Library lawn signs are also available for a suggested donation of $5. Visit any branch for details.

For more on the campaign, or to make donations, visit the PEC Public Library online at https://www.peclibrary.org/expansion/