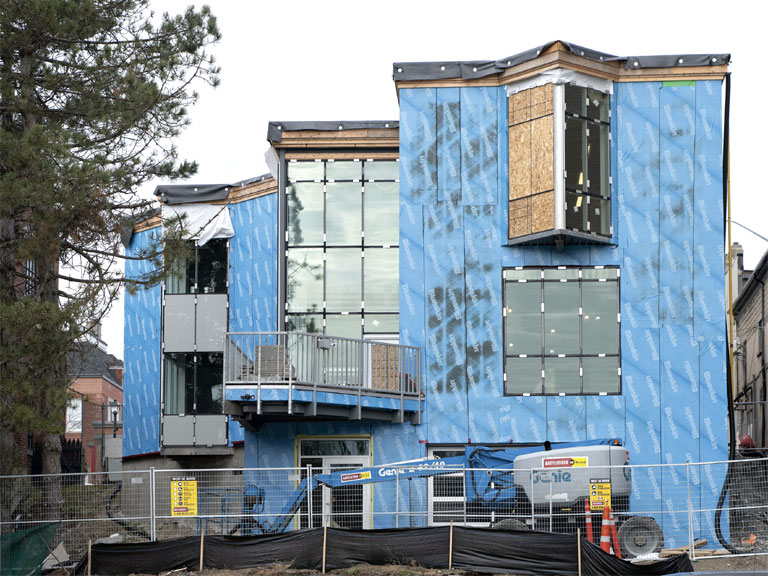 Thanks to a generous matching donation by Picton Home Hardware, the library expansion project could be tantalizingly close to its fundraising goal by year’s end. The Busscher family will match all donations through the month of December to a maximum of $25,000. Currently the project is just $60,000 shy of its $2.8 million goal, so the addition of a potential $50,000 will edge it closer to the finish line. Picton’s community support for its library has been going on since the 1850s with the very first library in the town. Fifty years later the community raised $10,000 as seed money to build the current Carnegie library in 1907, one of 111 in Ontario. The grand building served the community well for over 100 years, and still continues to do so. Alexandra Bake, chair of the fundraising committee, is thrilled with the donation from the Busscher family. “It came at such a great time because it has been challenging to promote the project in the face of all the other huge needs in our community. The Busscher family always said they would support us, and this is truly the right time for them to step up and bring us to the finish line,” she said. Library CEO Barb Sweet added that the family had previously made a donation of $5,000 to the project.

The library expansion will combine the modern with the classic, providing additional services as well as community meeting areas. The new expansion will have a larger area for the library collection, plus meeting rooms on each of the three floors. There’s a 60-seat auditorium, a new maker space and computer lab that will house the 3-D printer, a soundproof booth for recording, and an outdoor balcony area. Responding to the needs of youth in the community, there will be a quiet study area. Some of the meeting spaces will have a kitchenette where patrons can prepare hot drinks or reheat foods. Library staff will now have their own office area and lunchroom, and there will be fully accessible washrooms on each floor. A new HVAC system will be installed, and a “green wall” will help with air quality as well as provide a soothing ambience. After the new expansion is opened for use, the existing library area will be refurbished. The major plan for this area is to restore the vaulted entrance and reclaim some of the space now used as office areas. “All going well, we should be able to move in there in January, and the existing part of the building will have all the focus on it and we hope by early summer the entire building will be complete and ready to be fully unveiled to the public,” said Bake.

CEO Barb Sweet is looking forward to the new expansion being available for use. “It will be a safer, cleaner and better laid out environment. The maker space will be tremendous for the equipment that we have, which has unfortunately been a bit of a secret because we just haven’t had the space to display it properly. We will have new programming space to offer to the community, and there will be seven washrooms, which will be great because we haven’t been able to offer washroom facilities to the public for quite a while now. There will also be a deliberate juxtaposition between the old and the new, to honour our past. One of the original windows has been moved to the wall marking the new expansion. As a community, I think your library is a weather vane of how progressive you are, and I think this will show very well for Prince Edward County,” she said.

A library fundraiser called Swing Into the Future is planned in the spring of 2023 at Base31. It will feature the music of Brian Barlow and the evening will have a 1940s vibe, hearkening back to the early days of the site as a training centre of Commonwealth aircrews during the Second World War. This will be a celebration and grand finale of the fundraising efforts. “We feel that this [expansion] project and what is happening at Base31 is very indicative of the exciting future of Prince Edward County when it includes a reimagining of the past. We wanted to have a celebration, and this will be a fundraiser to establish a Legacy Fund for the library so that it can do the things it needs to do in order to make this place really sing, but also to be able to take things to the other branches that will now have opportunities in their spaces,” said Bake. Part of the Legacy Fund will be used to expand the technology offerings from the various branches, such as e-books, e-readers, computers and Internet hotspots, as well as traditional printed material.