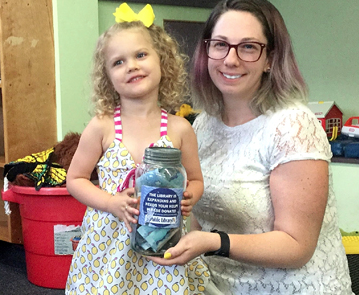 Four-year-old Dahlia Donovan showed her love for the library this week, presenting Whitney Shantz, Youth Co-ordinator, with $500 she raised at her lemonade stand.

The funds will be poured into the Picton Branch Library expansion project.

Shantz noted the young entrepreneur raised the funds at her lemonade stand this past weekend.

“Despite the torrential downpour, Dahlia stuck to her guns serving up lemonade and a glass of cheer outside of HandWorks in Bloomfield,” said Shantz.

When Whitney asked Dahlia what it was like to work in the rain, Dahlia said “It was cold, but I just kept going and going!”.
“That’s the true spirit of an entrepreneur!” added Shantz, who added CHEERS! to Dahlia and mum, Tarayn and Tammy Love at HandWorks for providing the space for the stand.