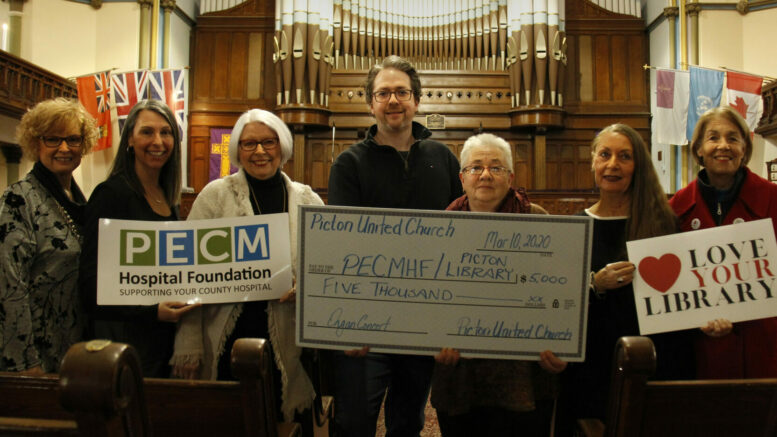 Picton United Church (PUC) have split and donated proceeds from a mid-February organ concert entitled ‘An Afternoon At The Movies’.

Organist Murray Baer brought the pipes of the historic organ to life and wowed approximately 300 guests with music from well-known movies including Indiana Jones, Titanic, Pink Panther, and many others.

Baer, being a County resident for a few years now, continues to fill area churches with the sound of the organ. Craig McRae, a resident of Toronto who regularly plays in the County, joined him on guitar and vocals.

McRae serenaded attendees with his voice and guitar with beautiful renditions of Elton John’s “Circle of Life” from the Disney movie The Lion King and Celine Dion’s, “My Heart Will Go On” from blockbuster movie Titanic.

Flashback February is a celebration of the history and heritage of Prince Edward County. It was a week-long collection of workshops, talks, films, performances, trivia and more all showcasing the County’s past.

“The afternoon was inspiring and moving in so many ways,” said Shannon Coull, executive director of the PECMH Foundation. “To see so many people come together to support our new hospital and the Picton Library’s planned expansion was truly extraordinary. The Picton United Church was filled with people who want to make a difference in the lives of others. We all wanted to sing along with the wonderful songs from so many nostalgic films. We are grateful for the support.”

Picton United Church believes a strong hospital and library are benchmarks of a strong community.

“It’s an honour to help Back the Build for a new County hospital and support the Picton Public Library,” said Tim McGinnis on behalf of the Picton United Church. “Picton United Church believes in strengthening our community and this concert helped us achieve just that. We were so pleased to be a part of such an incredible event.”

The PECMHF is grateful to all who supported the event, in particular, the concert’s presenting sponsor, Sandra Foreman and Jess Davis of Royal LePage Pro Alliance Realty in Picton.

PUC has been a donor to PECMHF for 21 years. With PUC’s contribution totaling $6,619 PUC’s name will be added to the PECMHF donor wall this fall at the SPONSOR level for gifts totaling $5,000 and over.

For more information on the Love Your Library campaign to expand the Picton branch please visit www.peclibrary.org

For more information and/or to donate the Back the Build campaign please visit pecmhf.ca

For upcoming events and/or to book an event at PUC please visit pictonunitedchurch.ca