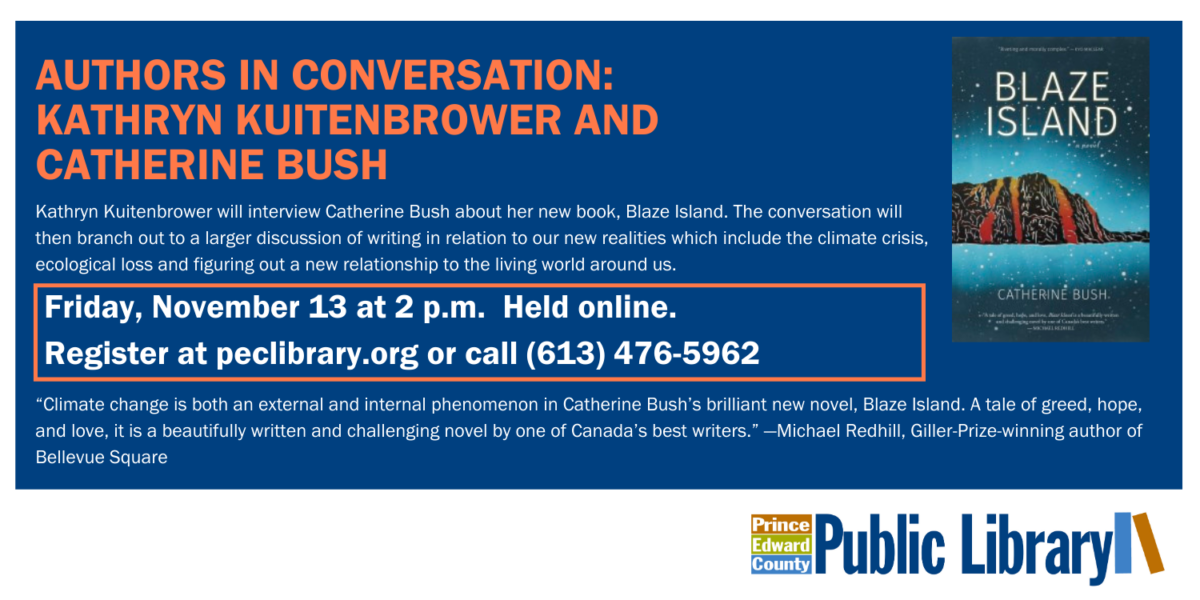 “Climate change is both an external and internal phenomenon in Catherine Bush’s brilliant new novel, Blaze Island. A tale of greed, hope, and love, it is a beautifully written and challenging novel by one of Canada’s best writers.” —Michael Redhill, Giller-Prize-winning author of Bellevue Square

Kathryn Kuitenbrouwer will interview Catherine Bush about her new book, Blaze Island. The conversation will then branch out to a larger discussion of writing in relation to our new realities which include the climate crisis, ecological loss and figuring out a new relationship to the living world around us.

Catherine Bush and Kathryn Kuitenbrouwer are both writing on the climate crisis and the relationship between science and fiction writing, which is one of the topics they will discuss in their conversation.

Catherine Bush is the author of five novels, including her most recent, Blaze Island (2020) and The Rules of Engagement (2000), a New York Times Notable Book and a Globe & Mail Best Book of the Year. She has been shortlisted for the Trillium and City of Toronto Book Awards, was recently a Fiction Meets Science Fellow at the HWK in Germany and has spoken internationally about addressing the climate crisis in fiction. She is the Coordinator of the University of Guelph Creative Writing MFA, lives part-time in an old schoolhouse near Stirling, Ontario, and can be found online at www.catherinebush.com.

Kathryn Kuitenbrouwer is the author of the novels All The Broken Things, Perfecting and The Nettle Spinner, as well as  the short story collection Way Up. Kathryn’s short fiction has been published in Granta Magazine, The Walrus and Storyville. She is the recipient of The Sidney Prize.  Kathryn Kuitenbrouwer grew up on a lolling fifty-acre farm in Ontario, where she had inordinate amounts of freedom and independence. The only danger was getting lost in the backwoods fairyland, falling asleep in the bed made by a clump of cedar trees, or getting caught by the boot in a frogpond. These were dangers she sought out daily. In some way, writing stories is a way back into these singular, unhinged experiences, because even in their strangeness, they felt both free and real. Kathryn now lives in an old stone farmhouse in the country north of Belleville. The deepest secret to writing, she believes, is to write what she sees, and smells, and hears, which is not always what is really there.